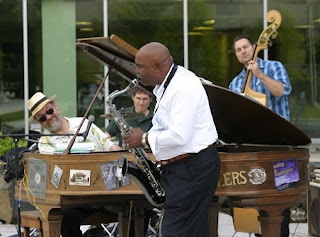 Something about piano players- they all seem to be good writers, too.  On my other website, goheadon, you can find wonderful "interviews" of Robert Lohr, Daryl Davis and Robert Baldori.  Since these interviews are done by e-mail, it takes a bit of commitment on the other side.  (Davis, an author, sent 12 single spaced pages!)  Well, here we go again, with Eric "Two Scoops" Moore: boogie-woogie and blues pianist, sideman, poet, songwriter, dishwasher, housepainter and husband.  The husband and storyteller parts are merged perfectly, since each story leads back to wife Amy.  But on the way you'll learn about blues, food and geography, and time spent hanging with people like Pinetop, Buddy, Luther, and "Earring" George.

How long have you been in Seattle?  How'd you wind up here?

In 1995 I was playing with Luther on the 3rd annual Ultimate Rhythm And Blues Cruise.
I spotted a hot little blues mama that seemed to be having more fun than everyone else.

Later I saw her standing behind a table with Washington Blues Society literature, (this week-long cruise was the 1st week in a 12 week tour that went from Boston to Florida to  Dallas  up to Tulsa back down to Houston then to Phoenix  LA, San Diego, Santa Cruz, Seattle, Vancouver, Edmonton Red Deer, Calgary, Ketchum, Idaho, Denver, Vail, Soiux Falls, Kansas City, Lincoln, Chicago, Dearborn, Buffalo and back to Boston.)

I told Amy I would be in Seattle in a few weeks and she gave me her phone number. When I got to  Seattle I called her from the Backstage and she drove from West Seattle   to Ballard to see me.  Now, on the cruise I couldn’t seem to pry  her away from dancing with Taj Mahal  long enough to notice me, but there at the Backstage on February 14,  I asked her if she had a Valentine and she said no, so I kissed her.

Exactly a year later on February 14, 1996, we were married at the original House of Blues in Cambridge, Massachusetts. Within a year I quit Luther’s band and moved to Seattle.

That is how I got to Seattle.

Where did you grow up?  And how did you get into boogie-woogie and blues?  How did you learn to play?

They tell me that when I was a baby I used to wave my arms like I was conducting when music played. It probably started when I was watching Lawrence Welk or Mitch Miller on TV.  My earliest memory is singing “Lazybones” and “Witch Doctor ”oo ee oo ahh ahh ting tang walla walla bing bang”.  Those songs were in my older sister’s 45 collection. She took piano lessons and I usually figured out by ear what she was practicing.  By the time I took piano lessons, it was impossible to teach me to read music because I could already play by ear or at least I thought I could. I couldn’t play anything right of course because I had to make up the ending which always sounded right to me, but the teacher could tell that I wasn’t reading. I never practiced but I always played. It didn’t look good for a successful music career.  It still doesn’t, but I’m still playing!

One thing that’s good about playing your own songs is that they can’t tell if you’re playing them wrong. There’s nothing like making up a song while playing it and that’s what the blues is all about. In my 1st piano lesson the old witch explained  that the strings are  like human voices that can hear each other and resonate with sympathetic vibrations.  I discovered the damper pedal; it turned the piano into an organ. It felt like I had a heavenly choir at my fingertips.

Tell us a little about your days touring with other blues artists.

I’ve been the low man on a lot of totem poles:

I was a dishwasher who wanted to flip hamburgers.

I was a land surveyor but I only held the “dumb end” of the tape. I had to hold the 0 end over a point in the ground with my thumb through a metal loop, while the smart guy pulled as hard as he could to accurately measure the distance. I always had a sore thumb, but at least I didn’t have to deal with any numbers. Finally, I refused to enter a patch of poison ivy and lost that job. I never did get to look through the transit.

I got a job for a painting contractor; I couldn’t paint at first, but I could carry and set up a 40-foot ladder by myself. They sent me up to paint the third-floor windows with a caulking gun, a putty knife and a can of paint and said, “Don’t come down until the windows are done and if you fall off the ladder, you’re fired before you hit the ground.” After working there for a few years, I wanted a raise from $6 an hour to $8.  They offered me $7 so I quit. Someone had offered me $3,000 to paint a great big house on my own ladder. From then on, I was painting on my own. 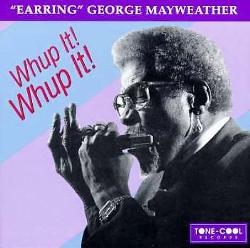 In the meantime, I was spending all the money I was making running around with “Earring” George. He was a high maintenance bluesman.  Every night I would buy him a pack of Newports, a pint of Seagram’s gin and a lottery ticket. We would go around from club to club.  Any time a major blues star was in town, George just had to show his face and we would end up sitting in. They were so happy to see that he was still alive! I’m talking about people like Buddy Guy, James Cotton, KoKo Taylor, and Zora Young. (George used to drive Zora Young to the blues jams in Chicago when she was a kid.) One time we were sitting backstage with Buddy Guy, Pinetop Perkins, and Big Daddy Kinsey. Some clown walks in and starts to tell George to leave. Pinetop Perkins leapt out of his seat and yelled, “That’s Earring George!” I won’t say who the clown was, but he knows who he is.

One person who puts up with no disrespect is Luther “Guitar Junior” Johnson. It’s a joy to watch him put arrogance in its place. One time in Belgium, they tried to put us up in the middle of nowhere on the outskirts of the city. When Luther saw the rooms, which were more like cells, he cursed a blue streak and threw the room keys down on the sidewalk at the feet of the promoter and said, “Take me to a hotel downtown where I can get something to eat or take me back to the airport.”  We were immediately whisked to a hotel downtown.  Working for Luther “Guitar Junior” Johnson was an ear-opening experience.

One time, we landed in Morocco a day early and there was no one at the airport to greet us. But there were lots of guys with machine guns standing around with their fingers on the triggers.  We checked into the Holiday Inn Crowne Plaza in downtown Casablanca. We all had to sign for our rooms; I was worried that I would have to pay for it myself. Luther said, “Don’t worry, they’ll pay.” They paid! That night “Sax” Gordon and I were exploring the Casbah and some guy kept bumping into Gordon saying, “American hi-karate.”  We kept walking and Gordon noticed that his passport was gone from his jacket pocket. We immediately grabbed the guy and started frisking him like two cops would, looking for the passport. I was afraid to let his hands go for fear that he would produce a knife. Just then 4 or 5 of his friends came running up to us saying, “You dropped these.” They were holding up Gordon’s passport and room key card. They gave us back the passport and the key and we gave them back their friend.  He had been pulling things out of Gordon’s jacket and dropping them on the sidewalk as his friends followed.

Luther is like a brother to me. It always cracked him up when I would say, “This is the best food I’ve ever had!” whenever it was free.  But the food was usually really good – they treated us like Kings most places we went. In Paris, we played the Lionel Hampton Jazz Club in Le Meriden hotel, for a two week stay. We could get half-price in the hotel restaurant but even half-price was too expensive. We would have had to pay $30 to eat at the $60 buffet.

Finding affordable food in Paris is difficult. I went to an outdoor market and saw three chickens; one was Fr.55 one was Fr.45 and one was Fr.15. The two expensive ones looked identical. I asked what the difference was and the Frenchman said, “The expensive one is better.”  The one that was Fr.15 was the scrawniest little chicken I ever saw, but it was the right price. The sign above it said “Couquette.”  I thought to myself, “Hmm, this must be the kind that they make chicken croquettes out of.”  It tasted kind of funny, so I gave the other half to the drummer. He thought it tasted funny too. The next day, I walked back to the market and I saw the other side of the sign. It said “Pidgeon.”  I finally broke down and bought myself a meal in the hotel restaurant. I ordered beef stew. It was the only beef stew I ever had with skin and fur still on the meat.  Even a quarter pounder with cheese cost $5.  My favorite meal in Paris was a head of frisse’ lettuce in an ice bucket with oil and vinegar and a loaf of French bread.

They sure are crazy about the blues in Europe. Luther always had me sing a couple of songs to open the show. Just imagine 10,000 drunk Belgians all yelling, “Big Fat Mama!”  It was a sight to enthrall.  Well, for a guy who normally made his money on a ladder, being on the international blues circuit was like 6th Heaven.  But then I met Amy and I ascended the 7th rung. I must admit, I was sleep deprived and in mourning for “Earring” George when I was pierced by Cupid’s sharpest arrow. I continued working for Luther for another year, but Amy had gotten me a 1-800 telephone number to call her on.  I had seen it happen to guys before and even been warned by Henry that “Women tell you they love you to play the blues, but the minute you get with them, they don’t want you to go nowhere!” he used to say.  But it was too late. I was infected and now I live in blissful isolation.  All I want to do is be close enough to smell her all the time. I don’t play my piano for anyone but her unless she compels me.

(Editor's note: Eric should be back at Luso Food and Wine on August 3 (check with Luso's for details).  Meanwhile, here's a LINK to videos that include Amy & Eric's wedding, a great performance with Luther "Guitar Jr." Johnson, and Moore's performance to a giant crowd at the 1999 Bumpershoot festival.  And  as an added bonus, below, Johnson in the 1990s with  in Europe with another pretty good band.)

Birth of a New One